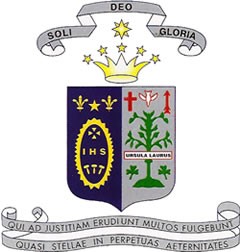 A History of the Ursulines in Italy (since 1535), France, Cork (since 1771) and Blackrock (since 1825)
St Angela Merici, 1474 - 1540, founded the Company of St Ursula in Cresica Northern Italy in 1535. She was an Italian by birth and was devoted to the education of girls. Other women and girls joined with her in this great work.These were people of prayer who loved God and put Him first in their lives.  They gave their time to prayer and to teaching.  Instruction of girls was unheard of before this.  The Ursuline Sisters began this new apostolate in the Church and were the first teaching order of women.  St Angela believed that a well-educated girl would make an excellent wife and mother and would be a powerful influence for good on her family.  Thus, she believed that society as a whole would benefit.

Meanwhile people in Ireland were suffering persecution under English rule. The Penal Laws were enforced against Catholics and they were denied education. It was against the law to open or attend a Catholic school. During the 1700s, score of illiterate children roamed the streets of Cork City, often in gangs. They had nothing else to do. Some of the more well-off families could afford to send their children to France or Spain for education. On return, some of these became nuns and priests in the convents and churches abroad. Many of these religious returned secretly to minister to the down-trodden people. However, Nano Nagle was one woman who ignored the Penal laws. To her, God’s glory and each person’s spiritual life were above any man-made law. She opened five schools for girls and two for boys in different parts of the city. The children flocked into them. Many girls wished to be a part of this movement so numbers increased greatly in the Company of St Ursula. Soon the Ursulines had spread over Europe. One of the most influential convents was the convent in Rue St Jacques in Paris.

Between 1767 and 1770 four Cork girls entered that Paris convent. They were Eleanor Fitzsimons, Margaret Nagle (Nano’s cousin), Elizabeth Coppinger and Mary Kavanagh. In time they became Sisters Angela, Joseph, Augustine and Ursula. Escorted by Fr Moylan and with an Irish born Ursuline sister from the French convent at Dieppe as superior, they landed in “the Cove of Cork” on Ascension Thursday, 9th May, 1771. Nano Nagle had built a house for them behind her cottage in Cove Lane, now Douglas Street. This new house became the first Irish Ursuline Convent.  Nano Nagle’s uncle, Joseph Nagle, left her an immense wealth of money in his will and she used this for her work in the schools.  However, she worried about what would happen to the schools after her life-time.  It was suggested to her that she bring the Ursuline Sisters to Cork to help her with the work.  Fr Francis Moylan C.C. (later Bishop of Cork) went to the Ursuline Convent at Rue St Jacques in Paris and the Reverend Mother agreed to accept any Irish girls who wanted to become nuns, into the novitiate for the training into religious life.


In 1825, the Ursulines moved to Blackrock. The parents of the boarders had complained about the lack of salt water bathing for their children.  In those days, boarders remained at school through the summer. Also, a fire in a dormitory, showed that much of the woodwork was crumbling and flues in the building were dangerous. The sisters searched for a place in the country, but near enough to the city where they could relocate. Blackrock was a lovely sea-side village where people came to holiday and it had sea-water baths. The house and grounds called “Pleasant Fields” was for sale. The owner was a Mr Theulon, a Cork city jeweller.  The Ursulines secured the purchase. Two extensions were made to the main front entrance - one on each side. The Western one was for the school and the Eastern extension was for the convent, choir and chapel. It was overseen by a Brother Michael Riordan from the North Monastery who was an architect before he became a Brother. The 42 Ursuline sisters and the boarders all moved into Blackrock in October, 1825. The Presentation Sisters then went into the Convent in Cove Street.

The sisters began at once to teach the children in Nano’s school in Cove Lane. Early in 1772 they took in their first 12 borders. They continued teaching the local day children. Both the number of nuns and the boarders increased quickly. Between 1775 and 1790 the Ursulines built on three extensions to accommodate everyone. The Ursulines were in Cove Street for 54 years. Today, these buildings are a place that celebrates Nano Nagle’s vision of empowerment through education, community inclusion and spiritual engagement for a contemporary world. The complex houses a museum, heritage rooms, gardens, the wonderful Good Day Deli, both a design and gift shop, and a Cork focused book shop in the museum. The beautifully regenerated convent buildings are also home to several educational charities.

The boarding school flourished until 1980 when it was closed to make way for the large numbers of day pupils needing secondary school education in the expanding local area.


In 2002, a new school building was completed on a green field site with Department of Education funds.  The land, on an adjacent site to the west of the original “Pleasant Fields” house, was generously given by the Ursuline Sisters, to secure education in Blackrock for future generations of local girls.   The school building was designed by Wain Morehead Architects and the work was overseen by Sr Mary McDaid, principal (1993-2009)  and Sr Jean Browne.  The new school is a state-of-the-art school, purpose-built to serve the needs of girls in the 21st century.  The work that began in Italy by St Angela in 1535 and in Cork in 1771 by the Cork Ursulines still goes on!
The school has now been headed by a lay principal since 2015 and is under the trusteeship of  The Le Chéile Schools Trust.  This trust comprises the schools of fourteen religious congregations including the Ursulines. The aim of the Trust is to carry on the legal, financial and inspirational role of trusteeship that had, up to now, been done by individual congregations.